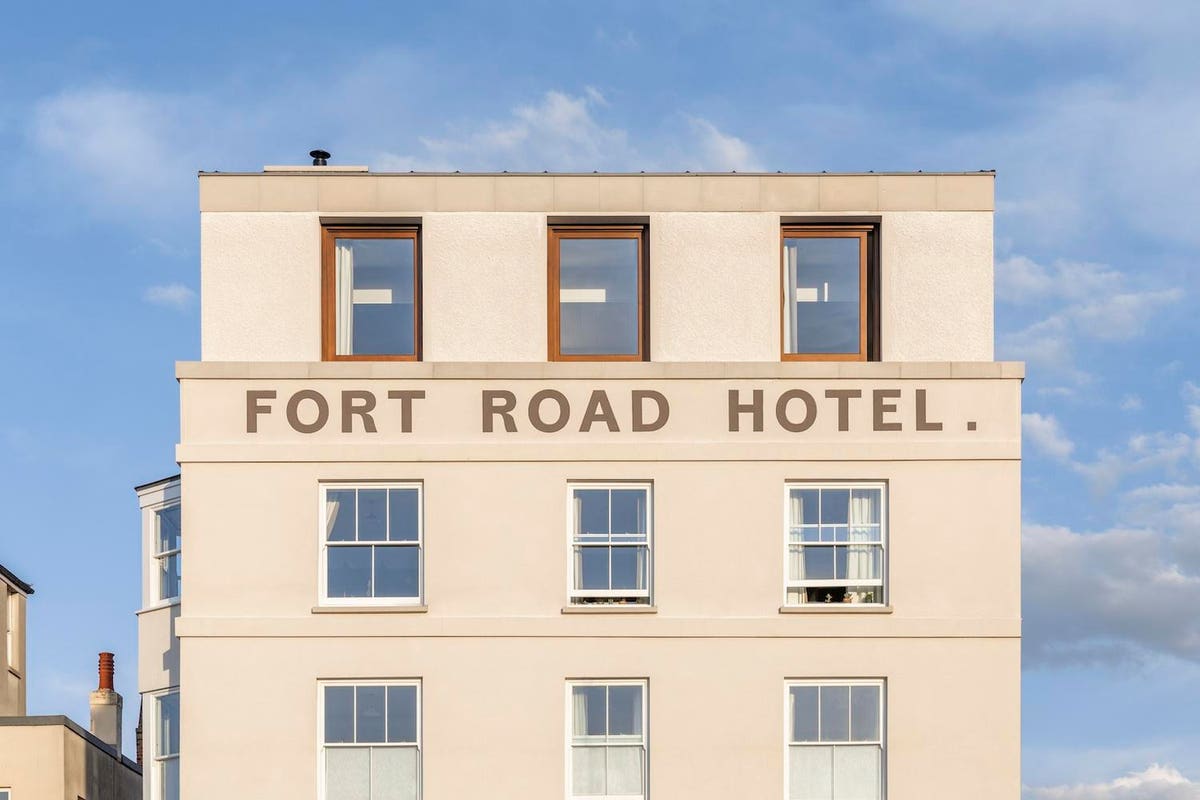 margate, on the south-east Kent coast, continues its revival as a seaside resort and popular arts and food destination. With miles of golden sandy beaches and dozens of chic hotels along the seafront, Margate was a favorite vacation spot for 19th-century Londoners. The town’s artistic links also date back to this time when landscape painter JMW Turner produced over 100 works while living there and said the skies found in Margate were “the finest in Europe”. More recently, contemporary artists and gallery owners have moved from London to Margate, including Tracey Emin who moved his studio to his hometown and Carl Freemanof the gallery and the print edition, Counter-editions is booming.

And just opened last month is the Fort Road Hotela stunning new boutique hotel, owned by a trio of the British creative world, on top of a cliff opposite the magnificent Contemporary Turner Gallery. Bought at auction four years ago as a virtual wreck, the 19th century building has been painstakingly rebuilt and redesigned by the three partners and Fleet architects, with an additional top floor and a terrace. The guest-only roof terrace is certainly a highlight with magnificent 360° panoramic views of Margate’s vast seascape and surrounding town. The owners are keen to point out that despite its dilapidated state, the hotel was clearly once a grand property at a time when Margate was a thriving town and popular holiday destination.

Highly recommended for a fall getaway by the sea, this chic hotel offers fourteen beautifully designed unique rooms (some with sea views) with warm white walls and pine floors, each with carefully selected works of art and mid-century furniture, giving the place a Scandinavian feel. Every design detail has been carefully thought out, from the 400 thread count sheets and handmade linen curtains, to the live plants, Louis Poulsen PH5 pendant lights and even the vintage light switches. The bathrooms are also gorgeous, with handcrafted Mexican tiles from floor to ceiling, contrasting with herringbone Carrara marble floors. Sustainability is important here with toiletries in refillable containers from Haeckels, a local favorite.

The restaurant, offering dishes from the ex river cafe chef Daisy Cecil, is already popular with locals and is set to become a destination restaurant with the ‘DFL’ (lower London). Serving breakfast, lunch, tea, cakes and dinner, the focus is on seasonal home cooking, using quality ingredients from local suppliers. Chef Cecil, in conjunction with consultant Gioconda Scott, has created a dinner menu inspired by late 19th and early 20th century food writers like Mrs. Beeton, Elizabeth David and Jane Grigson. The plan is also to host a series of chef residencies and workshops with local pickers and micro-producers throughout the year.

Considering who the owners are, it’s no surprise that art is everywhere at the Fort Road Hotel. The ground floor and basement bar features works by contemporary artists with close ties to Margate, including Tracey Emin, Lindsey Mendick and Hannah Lees, while a specially commissioned mural by Sophie Von Hellermann fills the stairs. 20th century abstract and figurative works have also been displayed in bedrooms and public spaces, collected across the UK, Europe, Scandinavia and the US over the past two years by Tom Gidley. Many of the pieces are by previously unknown mid-century female artists who merit reassessment. The hallways are lined with a large collection of vintage Margate-themed photographs, postcards, memorabilia and old maps. Ranging from the mid-18th to mid-20th centuries, they offer a fascinating social history of the city, its inhabitants and its visitors.

With a fantastic art collection, beautiful rooms, excellent food, a fabulous rooftop terrace and, above all, excellent service, run by the exuberant Tom Fogg (Le Caprice, J. Sheekey, The Wolseley, Scott’s) , the Fort Road Hotel is sure to be a hit.

What to see and do:

Colin’s Bike Tours are small-group excursions along the beautiful coastal paths led by Colin Welsh, an experienced guide. Colin, also a musician and artist, is a wealth of knowledge about the area and points out well-known and lesser-known sites along the way.

The pass tour from Margate to Broadstairs and back is manageable, mostly flat ten miles and includes historic sites like the Greek Revival Winter Gardens dating from 1911, the Lido (seaside swimming pool), a washing machine Victorian and Charles Dickens fort house. , now known as dark house where he wrote this novel and David Copperfield.

Turner Contemporary, designed by British architect David Chipperfield, has had a big impact on the local economy and cultural life since it opened on Margate seafront in 2011. Named after the famous painter, the gallery is found on the site of the Rendezvous Guesthouse where Turner lived. with Mrs. Sophia Booth, his landlady. Exhibits are free and range from first solo shows by artists such as Michael Armitage and Larry Achiampong to group shows by internationally acclaimed figures such as Tracey Emin, Akram Zaatari and Steve McQueen.

The Margate Bookstore is an independent bookstore in the heart of the old town selling used and new books with a fantastic selection. savages The café in the historic market square is ideal for brunch or tea and cakes. The chai latte is excellent.