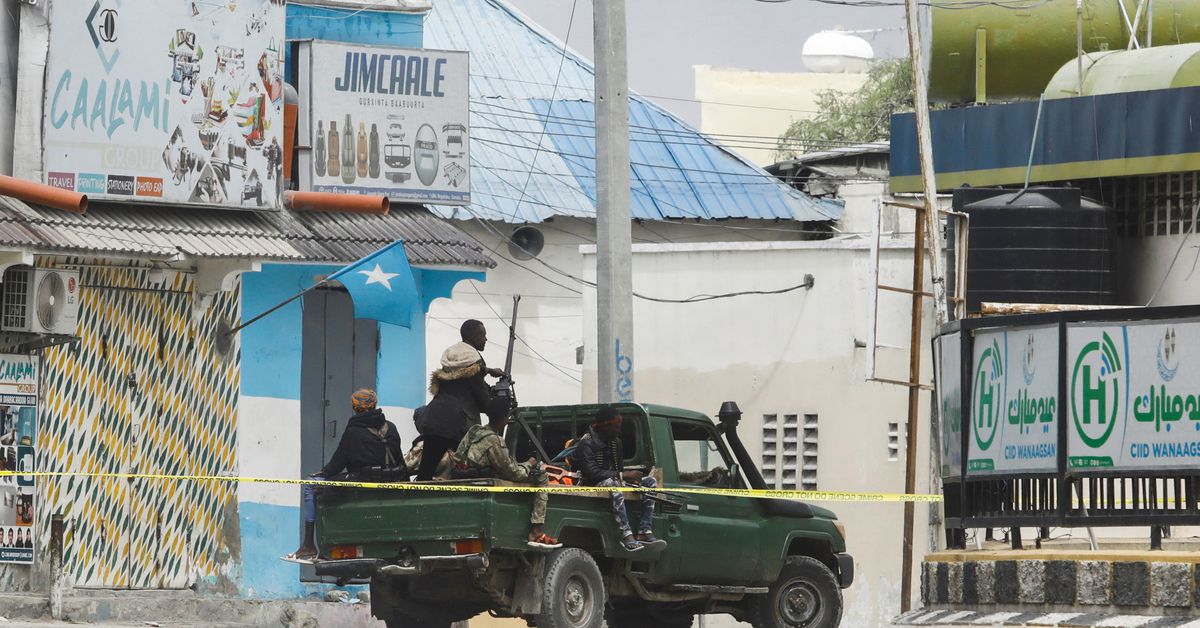 MOGADISHU, Aug 20 (Reuters) – At least 12 people were killed when al-Qaeda-linked militants raided a hotel in the Somali capital Mogadishu, seizing hostages authorities were still fighting to free 24 hours later, a said an intelligence officer on Saturday.

The attackers made their way into the Hayat hotel on Friday evening with two car bombs before opening fire. Somali Al Shabaab insurgents have claimed responsibility. Read more

“So far we have confirmed the deaths of 12 people, mostly civilians,” Mohammed, an intelligence officer who gave only one name, told Reuters.

The gunmen were holding an unknown number of hostages on the second floor of the building, Mohammed said, preventing authorities from using heavy weapons.

They had also bombed the stairs to make it harder to get to certain floors, he said.

As the siege entered its second day on Saturday evening, authorities had secured 95% of the building, state broadcaster Somali National Television said. The broadcaster did not give an updated number of victims.

Among those fighting the militants inside the hotel are Gaashan, a paramilitary force specializing in counterinsurgency, a former security official familiar with the force told Reuters.

The detonations sent huge plumes of smoke over the busy intersection on Friday night, and the sound of gunfire crackled through the capital again on Saturday night.

Somali security guards are seen in a section of the Hayat hotel, the scene of a militant attack by the al-Qaeda-linked al Shabaab group in Mogadishu, Somalia August 20, 2022. REUTERS/Feisal Omar

Explosions were heard on Friday night as government forces attempted to retake control of the hotel from militants, witnesses said.

Large parts of the hotel were destroyed by the fighting, they said.

Friday’s attack was the first major such incident since President Hassan Sheikh Mohamud took office in May.

The United States condemned the attack and said it was steadfast in its “support for Somalia-led and African Union-led efforts to combat terrorism.”

“We express our sincere condolences to the families who lost loved ones, wish a full recovery to those injured, and commend the Somali security forces,” US State Department spokesman Ned Price said in a statement.

Al-Qaeda-linked al-Shabaab claimed responsibility for the attack, according to a translation by SITE Intelligence Group, which monitors statements from jihadist groups.

Al Shabaab has been fighting for more than 10 years to overthrow the Somali government. He wants to establish his own rule based on a strict interpretation of Islamic law.

The Hayat Hotel is a popular venue with legislators and other government officials. There was no immediate information as to whether any of them had been caught in the siege.