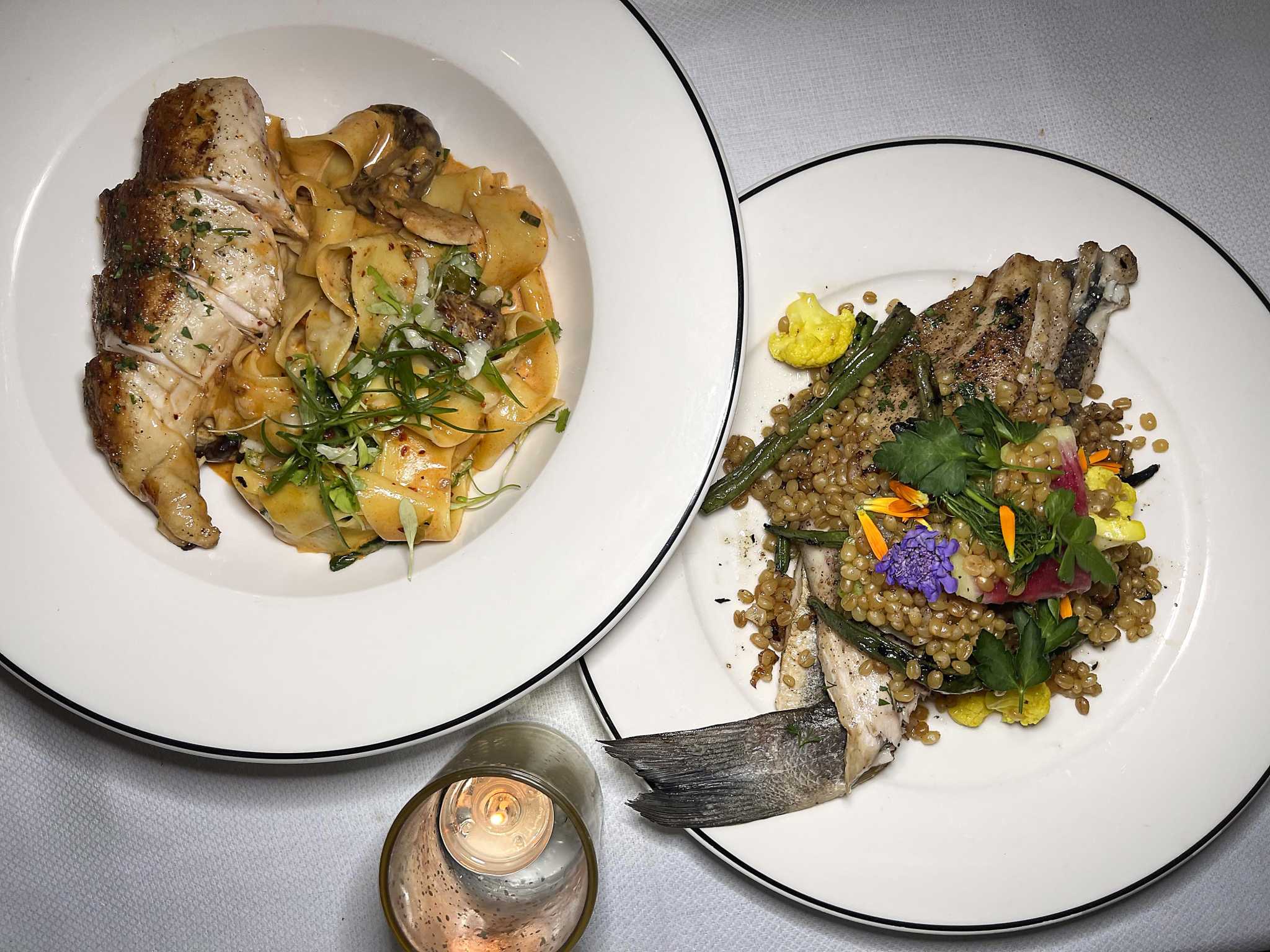 The steampunk grandeur of Pearl’s Hotel Emma’s lobby, clad in the dichotomous trappings of old industrial majesty, hides the luxury in plain sight. Its flagship restaurant Supper cultivates a similar vintage aesthetic, but it trades in the rivets for the glamorous wooden lounge of the fanciest restaurant in a booming 19th-century beef town.

The stage is set for the same high-end expectations in both contexts. It works for the hotel, and it works for the restaurant’s upscale service atmosphere and saloon-style bar with the flair of a true craft cocktail.

But it doesn’t work as well for food, a versatile hotel mix of steaks, chops, fish and poultry that seems contained in both presentation and flavor of color in the lines, mostly in shades of dark brown and reddish brown earth.

This was not always the case. Shortly after Supper opened in 2015, the Express-News praised him for his creative small plates and called chef John Brand a “veggie whisperer.” My first experience in 2017 included bursts of color from peaches with chutney, a salad of beets and blackberries, and a veggie side of spiced carrots with coconut and avocado layered and stacked like a Michelin entrée.

Brand is still at Supper as culinary director, a role he also took on in a similar capacity for the Pearl as a whole. The day-to-day execution in Supper’s kitchen falls to its staff, and therein lies the challenge of building a restaurant around one singularly talented individual and then delegating the work to others. Things get lost in disconnection.

On ExpressNews.com: Conclusion: Botika à la Perle is a story that suffers in the narrative

The most disconnected dish came as a whole roasted branzino, a versatile fish that fits on a plate and usually acts as a canvas for whatever the kitchen wants to create. In this case, that creation was a rudimentary mix of gnarled, undercooked wheat berries, overcooked green beans, and aggressively sour marinated cauliflower, none of which could make up for a fish that tasted like its best days on the market. dock for a long time.

Right behind that arc of disappointment came a starter of prawns with polenta that promised a progressive version of prawns and grits with leeks, lemon and sage. Instead, it came off as a much more humble, laid-back rendition with what the TV commercials called popcorn shrimp, too small to add the usual coral bounce of shrimp to the mushy base, helped not at all all by a desperate garnish of badly cut and edible herbs. flower petals.

A few dishes that might have worked were handicapped by lackluster execution, including a gem lettuce salad that looked half finished, with big clumps of poorly dressed lettuce and oversized brioche croutons like pandemia greasy pants. You were hoping that grilled chicken with pappardelle pasta might be more than the go-to for your less adventurous diners, but that’s all it was, a spongy beige bowl of noodles and chicken that invoked the review qu ‘no restaurant wants to hear: I could do this at home.

Even an ingredient that worked in one dish got beat up in another. While a mixture of cauliflower, Brussels sprouts, honey, peanuts and caramel popcorn was a bunch of guilty pleasures, I also ordered Brussels sprouts on their own, only to find that they had been beset by the same pedestrian overload of bittersweet that tends to plague Brussels sprouts everywhere.

It shouldn’t take that many paragraphs to get to the good stuff, but usually the good stuff balances things out. This is not the case at dinner.

I liked a greasy and juicy lunch burger with a market basket full of veggies on top. But it’s not one of the best burgers in town, not even the best in the Pearl. I also enjoyed a New York prime strip cooked a perfect medium-rare, despite a sloppy filling of fatty spinach that made the plate look like it had just come out of the gym.

I liked Supper’s Braised Lamb Stew, a rich mix of parsnips, celeriac, mint and kale with big, meaty bites like a bargain on a winter coat in March. But with the texture mismatch of its tough leaves, the kale should have taken the night off the stew service.

And I liked the bouncy pork meatballs with tomato sauce, hot peppers and ricotta. They have done their aperitif job: to whet the appetite.

In the midst of all this ambiguity, I rediscovered the unequivocal joy of the smoked and fried quail that marked my first trip to Supper, a light and crunchy comforting puff with creamy mashed potatoes and corn relish sweet pickled.

Quick Bite: American gastronomy at the chic Hotel Emma at the Pearl

*** Average, with some notable points

** Poor, with a redemption factor or two

* Bad, nothing to recommend

That first spark of joy dates back five years, when Supper reflected on its destination restaurant promise within a destination hotel, a successful study in the creative anachronism of celebrating the city’s industrial past while acknowledging its modern potential. But as Tony Soprano says, “Remember, when is the lowest form of communication.” Remembering is not enough.