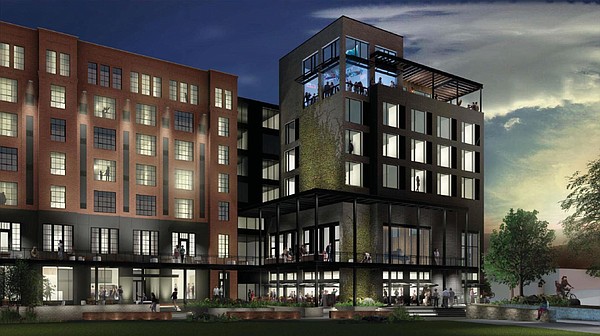 FAYETTEVILLE – Some city council members on Tuesday expressed general support for building a hotel at the south end of the downtown arts corridor’s Civic Square, but had questions about the details, especially parking. .

The board voted 8-0 to hold a decision outlining a deal with a private developer to build the hotel until its Nov. 1 meeting. The agreement is a letter of intent between the city and Brian Reindl and his company Reindl Properties to create a seven-story, 134-room hotel in association with the downtown arts corridor, known as the Ramble.

The board received a presentation from Rob Sharp, architect behind the hotel project. The ground floor would have retail, restaurant and cafe spaces, with public restrooms and storage available for an outdoor stage immediately to the north. The hotel lobby would have public art opportunities. A rooftop bar would overlook the square. The estimated cost of the project is $50 million.

“Brian is the kind of developer you need to develop the ground floor of your hotel,” said Sharp. “Instead of bringing a Chili’s, it will bring something local.”

Sharp spoke about the importance of having your eyes on the square for the safety of those below. The idea behind the project is to give vibrancy and activity to the area, as opposed to the inactivity of a car park, he said.

The project would include 32 to 45 basement parking spaces, but guest parking would primarily be handled by a valet system, Sharp said. He estimated that the hotel would need around 66 parking spaces for guests and another 62 for restaurant, cafe and bar patrons. Employees would be required to park offsite.

Fourteen members of the public spoke to council about the proposed project. Comments were split fairly evenly between support and opposition, with several residents expressing concerns about parking.

Jerry Davis, general manager of 21st Amendment, Rogers Rec, Los Lobos and West End, said he supports the project and asked if the developers could double the number of basement parking spaces. Justin Tennant, a former city council member who now sits on the board of the Walton Arts Center, said he’s not against the idea of ​​a hotel, but the parking plan needs to be well thought out.

Several board members expressed general support for the proposal, but said they wanted more information. Along with a parking map, they asked for more information about the footprint of the building, how the shadows would cast on the plaza, and the arrangement to have the value of the land assessed, among other issues.

City Attorney Kit Williams outlined the points he raised in a memo to council that while the agreement is a letter of intent, council’s decision will set key parameters for the project. City-hired real estate attorney Vicki Bronson said the agreement was designed to bind the developer to certain terms and the council could always suggest changes.

Reindl addressed the council and said he believed the city and his team could resolve the issues raised at the meeting.

“We’ve done our best with the letter of intent to put everything in place so there’s no bait and switch and saying ‘this is what we’re going to build,'” said Reindl. “If we do what we say we’re going to do, we’d like it to be binding before we spend millions of dollars.”