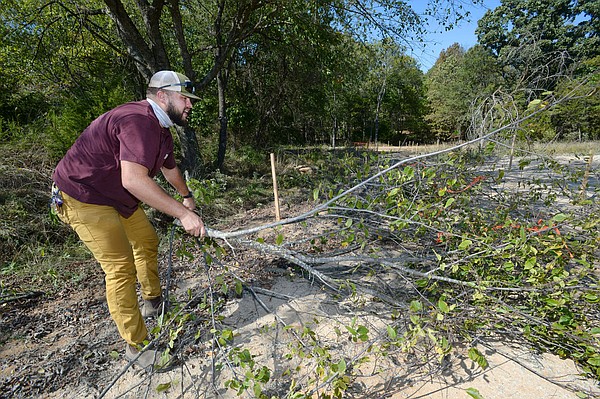 FAYETTEVILLE – Fans and future fans will get their first glimpse of a professional cyclocross event this week, perhaps with a little mud and beer mixed in.

Fayetteville is the second event on the list. Events in the United States will also be held in Waterloo, Wisconsin, and Iowa City, Iowa. Other events will be organized around the world in countries such as Belgium, the Czech Republic, France and the Netherlands.

Wednesday’s event will serve as a precursor to the union’s world championships taking place Jan. 28-30 in Fayetteville. This event will mark the second time that the International Cycling Union has hosted a championship in the United States, the first being the 2013 championship in Louisville, Ky.

Cyclocross is akin to mountain biking, involving short courses with obstacles, hills, steps and rough terrain prompting cyclists to get off their bikes to travel certain sections. The sport often gets dirty, with runners covered in mud, dirt and dust at the end of a race.

Organizers see Wednesday’s event as a test race when Fayetteville hosts the world championship, Rawn said. The city has recorded around $ 500,000 in accommodation revenue associated with the two events so far, and the office plans to analyze the economic impact after Wednesday’s event, she said.

The city has a sales tax on hotels, motels and restaurants of 2%. Half of the income goes to tourism and the other half to parks.

Wednesday’s event could have a total economic impact for the city of more than $ 1.3 million, according to a 2019 projection from the Runway Group, a Walton family business involved in the park’s programming. The world championships are expected to bring in $ 2.3 million in revenue for the city, according to the group.

Wednesday’s event will mark the park’s first professional cyclocross race, although the city has hosted local and regional cycling events in the park in recent years, Rawn said. A professional mountain biking event was also held at the park in April.

Planning for the two cyclocross events took years. An international group announced in 2018 that they would run here. The city acquired the 228 acres of Centennial Park in February 2018 for more than $ 3.3 million with a matching grant from the Walton Family Foundation. The deal involved the city repaying half of the purchase price in annual installments of more than $ 275,000 over five years.

The city also agreed to pay for maintenance and features such as a parking lot, pavilion, roads, and washrooms. NWA Trail Blazers, a nonprofit organization in Bentonville that helps build trails for biking, running and walking in the area, developed the soft surface trails for mountain bike and cyclocross courses.

The city spent approximately $ 5.2 million on the park between acquiring the land and building its features. The Walton Family Foundation spent nearly $ 5.5 million between the acquisition of the land and the soft surface trails for the courses.

Rawn said she was confident the city’s investment would pay off.

“This course is reserved for residents and tourists from all over to come and ride,” she said. â€œThis park is for everyone, and the events are a facet of it, but this park is also a gift to the city and its residents. Absolutely, it will pay dividends, and we will see a return on that investment, without a doubt. . “

The city unveiled a conceptual master plan for Centennial Park in April 2019. The plan will be built over a few years and includes 16 miles of trails, playgrounds, canopy walks, picnic areas, a pavilion, an area hammock, a stage, a campsite, toilets and storage.

The 16 miles of trails for mountain biking and cyclocross racing are complete, said Erin Rushing, executive director of NWA Trail Blazers. Runners and spectators alike should expect a variety of challenges on the courses, including steps, tunnels, inclines, mud and rocks, he said.

Spectators play a key role in the attractiveness of cyclocross, said Rushing. Participants will be able to drink beer and eat food and stand along the course routes for a close-up of the action.

â€œThere is nothing like it elsewhere in the region. For a bicycle specific event space, it is world class,â€ said Rushing. “It’s an amazing property to start with, but to add that event space to it, it’s awesome. It has monumental features and is specially designed for a race. It’ll blow people away.”

The entire park is more than half built, said Ted Jack, the city’s park planning superintendent. The tracks for the courses are finished, but the pavilion with the toilets will not be finished until the world championships in January, he said. An 83-space car park has been set up but will be occupied by vendors and event organizers for Wednesday’s World Cup. Spectators must park at the Baum-Walker stadium and take a shuttle bus to the park.

The idea from the start was to bring in the spectators for the big events, Jack said. The master plan includes 420 parking spaces in unpaved spaces in addition to parking. Portable toilets will be installed for cyclocross events, he said.

The parks department will review the master plan after UCI events to determine which features are most appropriate for the park, Jack said. Basketball and pickleball courts can enter it, for example.

â€œThe things that are left are more like things you could build – like you’ve made a playground or put a zipline in the trees,â€ he said. “There are a lot of different things you could do.”

Jacob Smith, an NWA Trailblazers worker, drives a utility vehicle on Friday, October 8, 2021 on the course as he and others prepare for the race at Centennial Park in Fayetteville. The Union Cycliste Internationale will host a World Cup cyclocross event at the park on Wednesday. City officials expect around 2,500 people to attend. The event will be followed by the UCI Cyclocross World Championships which will be held from January 28 to 30. Visit nwaonline.com/211009Daily/ for today’s photo gallery. (NWA Democrat-Gazette / Andy Shupe)

Forecast: Showers and thunderstorms likely, and partly sunny with a high temperature nearing 79 degrees, according to the National Weather Service of Tulsa, Okla.

Parking will be at Baum-Walker Stadium at 1255 S. Razorback Road. A shuttle will take participants to the park.

Participants must provide proof of covid-19 vaccination or a negative test taken within 72 hours of entry. The tests will be available at the Baum-Walker stadium.

Food and beer vendors will be installed in the park.

Tickets are free, but participants are requested to register in advance.

WATCH PARKSCENTER – Review of the WDW 50th, Star Wars hotel reservations and everything we know about Genie + and Lightning Lane!