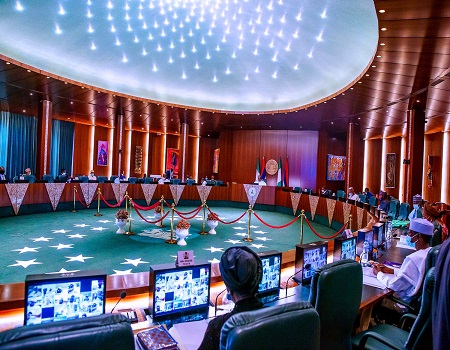 Finance, Budget and National Planning Minister Zainab Ahmed revealed it to correspondents after the council meeting chaired by President Muhammadu Buhari on Wednesday.

She said her ministry presented a note to the FEC with forecast 2022 revenue of 6.54 trillion naira and 2.62 trillion naira to be paid into the federation account and VAT, respectively.

According to her, these incomes are expected to increase in 2023 to reach 9.15 trillion naira.

She explained that the MTF FSP describes the socio-economic and development objectives and priorities of the federal government for the reference period from 2022 to 2024 as well as the fiscal strategies to be put in place and the policies to be achieved in the priorities.

Ahmed said the report to the council highlighted the main drivers of government revenue and spending plans.

“The objective for us is to improve the macroeconomic situation of the nation or to reposition the economy on the path of inclusive and sustainable diversification. The MTF FSP consists of medium-term macroeconomic projections, fiscal targets and estimates of revenue and expenditure, including the government’s financial obligations, ”she said.

She explained: “We have also presented the federal government with projected revenues for 2022 to 2024. Specifically for 2022.

“These revenues are expected to increase in 2023 to reach 9.15 trillion. The total expenditure which we expect, we have projected and approved by the Council is an overall expenditure of 13.98 billion naira. This includes 1.1 trillion naira in SOE spending as well as grants and donor-funded projects amounting to 62.24 billion.

“This means that this budget is only 3% higher than the 2021 budget in terms of the size of the expenses.

“We also brought the budget deficit and spending funding items to the council’s attention. The budget deficit forecast for 2022 is $ 5.62 trillion, compared to $ 5.60 trillion in 2021. This amount represents 3.05% of estimated GDP, which is slightly above the 3% threshold specified in the law. on fiscal responsibility.

“The ARF empowers the President to cross the threshold in his opinion the nation faces threats to national security. And it is our opinion on the agreed fact that we can go beyond.

“The deficit will be financed by new foreign and domestic borrowing, both domestic and foreign, in the amount of $ 4.89 trillion from the proceeds of privatization of $ 90.73 billion and drawdowns on loans linked to existing projects. of 635 billion.

“I just want to say that the project had a debt-to-income ratio in the ratio is 43%. Which, of course, we know Nigerians are all concerned about the actual debt-to-revenue ratio in 2019 which was 58%. This is therefore an improvement compared to 2019. In 2020, the ratio reached 85%. So 2022 is a significant improvement over the 22 inch. I like to stop here right now.

The minister said she provided the council with a macroeconomic history, which asserted that the Nigerian economy has recovered from negative growth of minus 1.8% in 2020 to 2.5%.

She added: “In addition, inflation has moderated from a 19-month high to a two-month high. It has now been moderate for two months now, dropping to 17.93 percent. And our foreign exchange reserves stood at 34.2 billion at the end of May, or 640 million less than the previous month.

“The main macroeconomic assumptions that have been presented and approved by the board are that there will be a benchmark crude oil price of $ 57 per barrel of crude oil for 2022, crude oil production of 1.8 million barrels. per day and our exchange rate of 410 or 15.1 to the US dollar, an inflation rate of 10% in 2022, and nominal GDP of $ 149,369 billion.

“What is interesting is that the non-oil GDP continues to grow to 169.69 trillion naira compared to the total GDP of 14.8 trillion included in nominal GDP. I beg your pardon, nominal consumption is 130 49.3 6 billion.

The president’s special advisor for media and advertising, Femi Adesina, announced that the board has approved the Ecological Fund projects for the 3rd and 4th quarters of 2020.

He said the funds are intended for soil erosion / flooding and pollution control intervention projects, with contracts awarded in favor of various contractors, for a total amount of 16,041,101,334, 79 N, including 7.5% VAT.

“Next, the revised estimate of the total cost of the contract to construct the 132 kVA Damaturu-Gasua-Nguru dual circuit transmission line for the Transmission Company of Nigeria (TCN) was approved. “

For his part, Transport Minister Rotimi Amaechi said the council had approved the purchase of Canty Towers, located at 35 Adetokunbo Ademola Street, Victoria Island, Lagos, for the new headquarters of the Nigerian Maritime Administration and Safety. Agency (NIMASA), in the amount of N 17,471,500 130.54, including tax of 7.5%.

Public Works Minister Babatunde Fashola in his remarks said work was underway on more than 13,000 roads and bridges across the country under 859 contracts.

He added that the ministry has completed the construction of more than 5,000 kilometers of roads.

YOU MUST NOT MISS THESE TITLES NIGERIAN TRIBUNE

CLAIM: A Twitter user claims the Arab League of Nations sent a warning message to the Nigerian government over the Biafra move. with loans. Budget 2020: FG to finance deficit of 5.62 trillion naira with loans

Budget 2020: FG to finance deficit of 5.62 trillion naira with loans