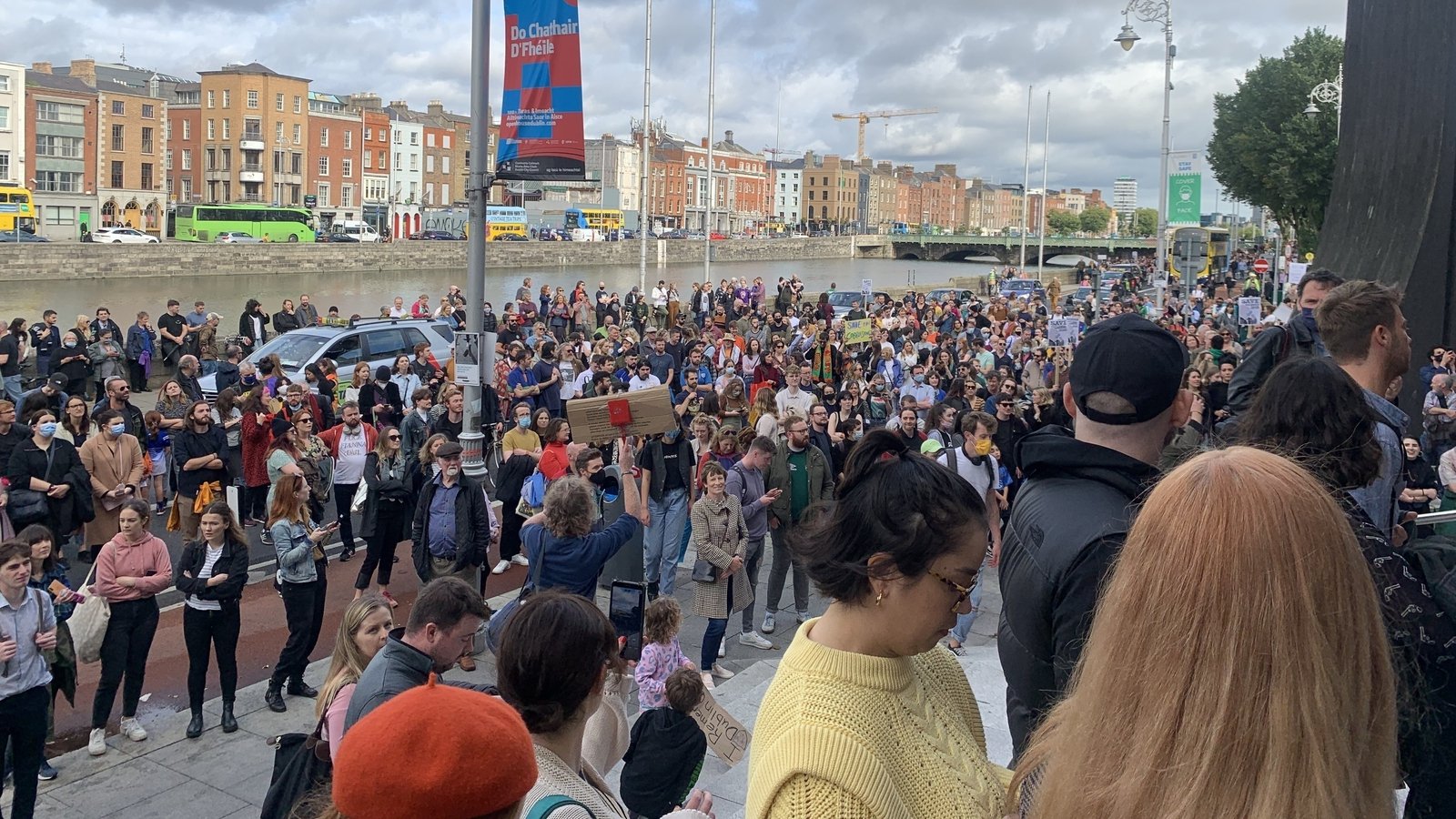 Hundreds of people marched in the capital this afternoon to oppose proposals to build a nine-story hotel around The Cobblestone pub in north Dublin city center.

While the developers say the pub will be preserved as part of the plan, the impact this could have on the well-known traditional music venue is cause for concern.

The Cobblestone Pub in Smithfield Square has been run since 1988 by the Mulligan family and is a central part of the city’s traditional music scene.

Earlier this month, Marron Estates requested construction of a nine-story, 114-room hotel on the North King Street site. have on the size, viability and character of the place.

Tomás Mulligan, the son of owner Tom Mulligan, grew up in the apartment above the bar. He said the plans would result in the loss of the bar at the back of the hall, where live music is currently being played, and the beer garden and smoking area at the back, reducing capacity by 70%. .

“Doing this would make this place completely unsustainable financially. It would starve us out of Cobblestone and become a glorified bar for hotel residents,” he said.

“It’s horrible. We don’t need that. It’ll just kill the character of this place. It’s the last building in old Smithfield that remains.

“There are enough hotels around the square. We don’t need that, engulfing this place. It’s a living and breathing part of Ireland and doing that will kill it.”

About 26,000 people have so far signed an online petition opposing the site’s plans and today hundreds of protesters marched from Smithfield to the Dublin City Council offices to voice their concerns.

Protest organizer Eoghan Ó Ceannabháin called on people to oppose the plans before the November 4 deadline.

“It’s basically kind of a cultural center. The proposal would change it. It would empty its life and just leave a kind of shell of the old pub there,” he said.

Musicians play outside The Cobblestone pub to oppose plans to build a hotel around the traditional music hall @rtenews pic.twitter.com/nq8UsMKBno

Musician John Franic Flynn described the plans as “an attack on our culture”.

“People come to learn music there, there are Irish language courses. I learned all my music at The Cobblestone,” he said.

“It’s just an attack on our culture and that’s why there are so many people here today. They’re not here for just any old ad.”

Sunil Sharpe of the Give us the Night campaign called for emergency measures to stop the loss of any other cultural place in the city.

“This is an erosion of culture and cultural places in the city,” Mr. Sharpe said.

“The council has been aware of this problem for a few years. They say there will be greater protection of the sites in the city’s new development plan, but Dublin cannot wait for this. There must be measures to ’emergency set up as soon as possible. “

The future of the site around The Cobblestone will become clearer when Dublin City planners make their decision on the proposals at the end of November.