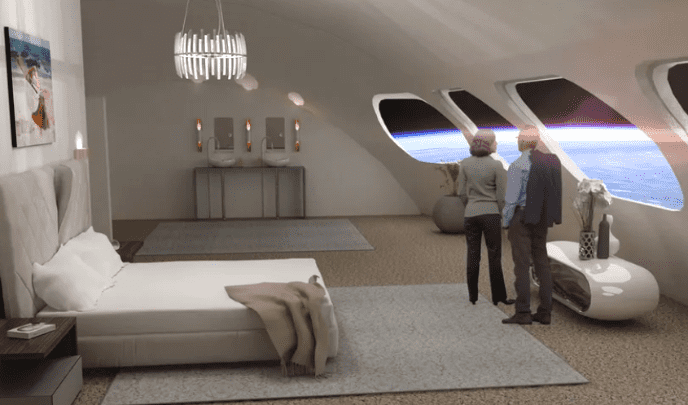 It will be the first hotel in space that will have rooms, bars and a party platform

Waking up in a room in the middle Empty This will be possible from 2027, with the opening of the first space hotel of 50,000 square meters and will be able to accommodate up to 440 people. “Going to space will be another option that people will choose for their vacations,” they announced from the Gateway Foundation, on the occasion of the opening of the Voyager station.

The hotel will be built by Orbital Assembly Corporation, which describes itself as “the world’s first large-scale aerospace construction company”.

According to the organization, the construction of the establishment will begin in 2026 and the first passengers will visit the hotel in 2027. Although the opening was initially planned for 2025, the coronavirus pandemic has delayed the project.

As for the design, it will be shaped like a rotating ring that will give the station a gravity equal to one-sixth of Earth’s gravity. Architect Tim Alatorre explained that the aim of the project was to make the visiting space accessible to everyone. “At the end of the day, going to space will be another option people choose for their vacations, like going on a cruise or going to Disney World,” Alatori told Design magazine.

What will the design look like and what services will it provide? The first element to be built is the unpressurized central annular structure which will contain in its center the mooring axis. Then, the shield of the outer ring with a diameter of 200 meters will be assembled and connected to the central ring by a wireless network. This ring will support the 24 residential units, which will be used for accommodation in hotels, restaurants, bars, gymnasiums, crew accommodation and scientific research units.

Guests can relax in a three-tiered bar with a water fountain that “obviously would defy the laws of physics.” In addition, an activity unit and gymnasium will be used with seven meter ceilings. At night, it will serve as a concert hall where “Earth’s greatest musicians will rock the station as it circles the planet.”

The idea is that Voyager Station has all the characteristics of a luxury hotel with comfortable interiors. In this sense, it will have an offer of holiday accommodation with “luxury villas” of 500 square meters which will be offered for rent on a weekly, monthly or permanent basis.

What will these “luxury villas” look like? Each will have space to sleep 16 people, as well as three bathrooms and cooking facilities. Adjoining the villa, the space station will house several hotel suites of 30 square meters, which can accommodate two people and have private bathrooms.

According to the Gateway Foundation, since a space hotel has allure, guests should expect an experience similar to visiting an upscale hotel, with restaurants that “will rival the best places on earth.” .

Currently, many architectural studios are developing space tourism. Recently, transportation design studio PriestmanGoode developed a high-performance airship concept to take space tourists on a “cruise” around the stratosphere. London studio Seymourpowell designed the interior of the Virgin Galactic spacecraft to carry six passengers on a semi-orbital flight through space and see Earth.

Better to decide.
This is the reason for reporting

Support for WHO Citizens

They believe in democracy

We will make a country.

We have been practicing journalism for 106 years. Today, as in other periods of El Salvador’s history, the press is needed to bolster public opinion.