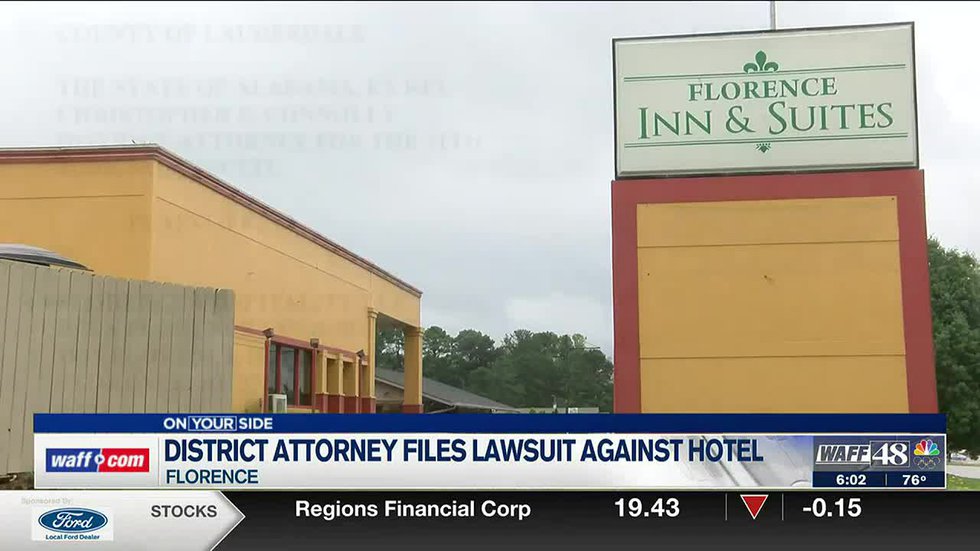 A lawsuit alleges these crimes occur at a Florence motel and have a major impact on surrounding areas and businesses.

The District Attorney and Chief of Police are calling Florence Inn and Suites a drug-related nuisance. A manager of the company next door says the same thing.

It’s a place where guitarists come looking for the perfect melody. Sound Shoppe director Tanner Triplett said he doesn’t always have peace of mind due to crime in the area.

As recently as today, he filed a police report for someone who attempted to break and enter overnight.

â€œThey ripped off the lock on the door, right there, so they tried to open it,â€ Triplett said.

The prosecutor’s office filed a complaint against the hotel right next to the business.

The complaint alleges that the Florence Inn and Suites on Florence Boulevard is a hangout for criminals and the owners are not doing anything about it. The lawsuit indicates that the crime at the hotel has an impact on the crime in the surrounding area.

â€œIt’s always something. Here, over there, in the apartments over there. I find needles everywhere outside, â€said Triplett.

â€œWe answered 878 times. This is the bare minimum. This only represents calls to that particular address. So I went back and wrote a report and within 500 feet of this location, 500 feet from 1915 Florence Blvd, in five years we have answered almost 2,000 calls there, â€said Tyler.

These calls for crime range from drugs to theft and even rape.

The lawsuit designates Florence Hospitality LLC as the company responsible for the hotel.

Tyler said police have tried to resolve issues with management by informing them of what is going on in the community and offering them solutions.

â€œThe neighbors and the businesses that surround it are fed up. So we took this enforcement piece and tried to enforce the law and we are tired of enforcing it with all drug crimes. The third thing we do that got us here is engineering. So I tried to do education, law enforcement, and the third is engineering. We’re trying to build some kind of permanent solution, to design some kind of permanent solution, â€Tyler said.

District Attorney Chris Connolly is asking for a hearing to close the motel as soon as possible.

Triplett said it could affect what’s going on in the area.

â€œIf there wasn’t such a hotel, it was like that with all the drugs and stuff. It will be much better. I wouldn’t have to deal with all of this at all, â€said Triplett.

The lawsuit also calls for a civil penalty, asking homeowners to pay $ 1,000 per day for each day the nuisance persists.

Hotels, restaurants and shops planned for the Kino Sports complex