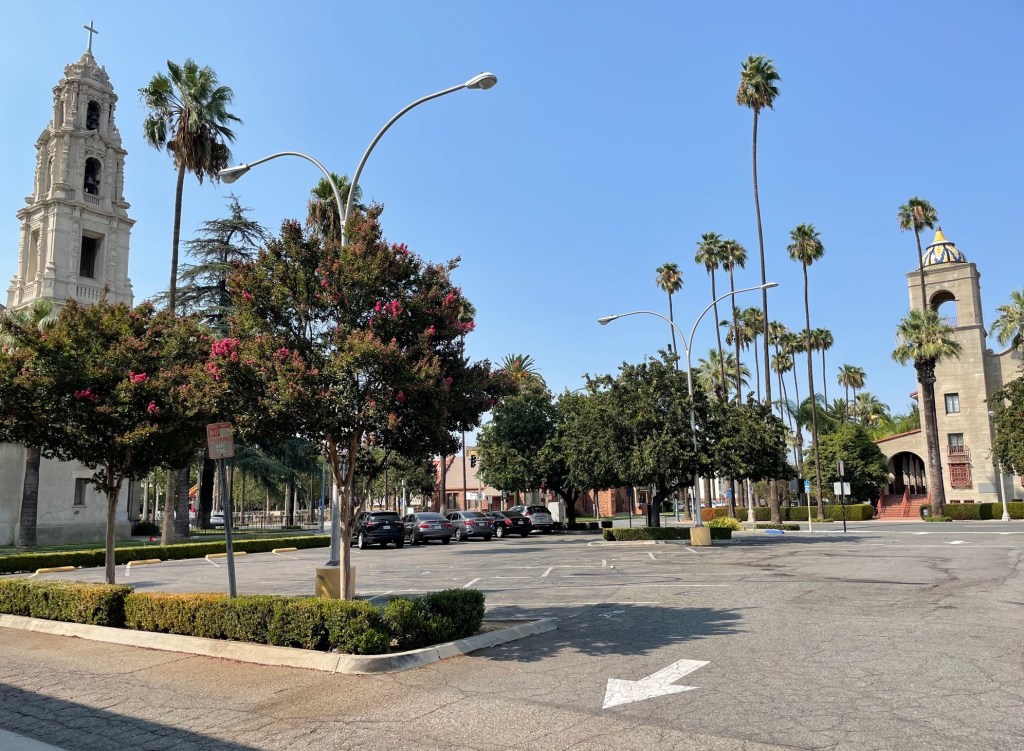 The downtown Riverside hotel project saga kept me captivated, mainly because the opposition is kind of a puzzle. The eight-story Marriott would go up on vacant lot near museums in a tourist area off a freeway. What not to like?

Oh, you know: it’s too modern, it’s too high, it would shade (we’re apparently afraid of shadows now), it would block the view because it’s like a building.

Among critics, since the hotel would be almost as tall as the 1913 First Congregational Church next door, motorists on Highway 91 could no longer see the church steeple.

It’s a beautiful tower, but really? Maybe I’m out of step, but people rushing along the freeway should keep their eyes on the road, not trying to spot local landmarks at 80 mph.

In fact, if drivers regularly turn their heads to look at the church, blocking the view could make us all safer. (Does the State Highway Safety Bureau offer grants for the construction of hotels?)

My colleague David Downey admirably covers the saga, including criticism of church members who say the 93-foot-tall hotel ladder is “insane” and will “overwhelm” the area – even though it is shorter than the 114-foot-tall church.

To be fair, most of the church is smaller than that. Maybe the hotel would overwhelm the area. But for now, the area is disappointing – more on that in a moment.

The Planning Commission approved the hotel’s plans in April, the Cultural Heritage Council was deadlocked the same month and recourse to the municipal council was to be heard last Tuesday.

I decided to attend. I like city council meetings and hadn’t been to Riverside before. Of course, my first one was kind of a mess.

I showed up at 3:00 p.m., the scheduled hearing time, and had 15 minutes of time off while routine business was over. I knew I should have brought a book.

With the hotel hearing next, Mayor Patricia Lock Dawson has requested a five-minute recess. No more downtime.

City Councilor Erin Edwards, where the hotel would be built, said a few late emails on the matter had arrived and she should read them. She asked for a longer break.

“How long?” MayorLock asked. Edwards replied, “Half an hour.”

The moans of the audience were audible. Council members, who like most of us could just browse emails while half-listening to the live testimony, were also not thrilled. But the request was granted.

With 30 minutes on my hands, I returned to my car to read some material, then decided to walk around the hotel site. It was only a few blocks along Mission Inn Avenue.

The site in question has been a parking lot for over 50 years. (So â€‹â€‹far no one has argued that this makes the parking lot historic.) It’s one block from the under construction Cheech Art Museum, which should attract visitors from all over, and across the street from the Riverside Art Museum, which is supporting the creation of a hotel there.

With an exit from Highway 91 two blocks east, the neighborhood is a gateway to Riverside, and not quite appealing. The first block has, on one side, a car garage with long shutters and a mortuary. So it’s a factual statement to say that the area is a bit dead.

A hotel looks perfect for the site, but what do I know? Only that in many cities of the Inland Empire – Ontario comes to mind – officials would open bottles of champagne if a branded hotel wanted to move downtown.

With the site review complete, I took it back to the Council Chamber and read my journal. Finally, at 3:53 pm, the meeting started, but not as planned.

A town planner went to the desk to say that three written communications on the subject had arrived. They were 54 pages, 128 pages and, gulp, 447 pages. The hearing was postponed to October 12.

More moans were heard. I didn’t have much to show from my first Riverside Council meeting other than a few milestones. Plus, I can’t imagine Edwards being excited about an additional 629 pages to read.

But wait, there is more. These late-breaking documents consist of an impact assessment performed for the developer, a response from the developer to all comments received to date and – what is it? – an objection from a lawyer from the neighboring Mission Inn.

The famous hotel claims its potential competitor is “too big” for its site – does the Mission Inn think something is too big? – and “incompatible with its environment”, among other complaints.

In another development, the Marriott plan was revised last month to improve on one of its distinguishing features: the rooftop observation deck.

The bridge was once confined to the far northwest corner of the U-shaped building, overlooking the intersection and the Congregational Church. It is now proposed to extend along a greater portion of the faÃ§ade facing Mission Inn Avenue.

This was a suggestion from Edwards and adopted by the developer, who reduced the number of chambers from 226 to 220 to do so. Basically the size of the bridge will double.

“The intention is to help reduce the mass around the corner and provide more views,” Scott Watson, the town’s historic preservation officer, told me Friday.

Speaking of things to watch downtown, have you read this crazy story about the downtown Riverside Hyatt hotel guest setting his own room on fire? Sprinklers went off in several rooms on August 16, causing $ 100,000 in damage.

I’m not sure if a future Marriott guest would be able to see this action from the observation deck. There are a lot of tall buildings in between.

It was hard to read that Brendan Brandt, former Upland city councilor, had died at 57 – my age – running a half marathon. The funny but circumspect Brandt gave me a careful interview when he last met in 2014. But a few years later he saw me through a restaurant window as he walked past, walked in and joined me, where he unfolded a lot of funny stories, all unofficial of course. He was a good, fun guy to talk to. My best to his family.

3 common communication mistakes we make with the C-Suite