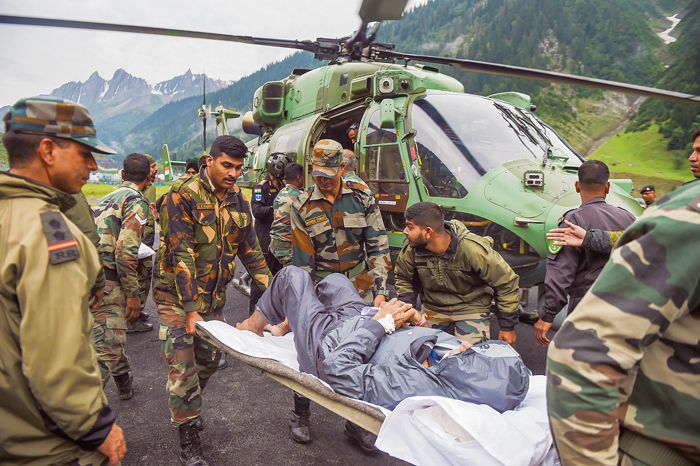 No movement of pilgrims in Valley today: The Tribune India

With the Amarnath pilgrimage temporarily suspended due to flash floods at the cave shrine, there will be no movement of pilgrims from Jammu to Kashmir on Sunday.

Although 6,048 pilgrims started their journey from Jammu to Baltal and Nunwan base camps in Kashmir on Saturday morning, no further movement will be allowed to avoid rushing to Kashmir base camps until the pilgrimage resumes. . Pilgrims went in over 110 vehicles from Bhagwati Nagar.

In a statement, Jammu Deputy Commissioner Avny Lavasa urged pilgrims coming from other states not to travel to Yatri Niwas in Bhagwati Nagar on Sunday but to 30 other accommodation centers in the city.

The administration has already made arrangements to accommodate 15,000 pilgrims in various accommodation centers. Food from the community kitchens will be provided to them. Due to flash flooding at Amarnath Cave, the pilgrimage has been temporarily suspended from two base camps in Kashmir to the cave shrine.

Accommodation centers in Jammu are located at the railway station, Gandhi Nagar, Nanak Nagar, Purani Mandi, Geeta Bhawan and Nagrota among others.

The traffic police, in its notice, said no yatra convoy would leave from Bhagwati Nagar on Sunday.

Tourists and local residents have been advised to undertake a trip on the Jammu-Srinagar highway only after confirming its status with the control units.

Meanwhile, National Conference President Farooq Abdullah said the government should order an investigation to determine how tents and community kitchens were set up in a very vulnerable area near the shrine, which has been hit by Friday flash floods.