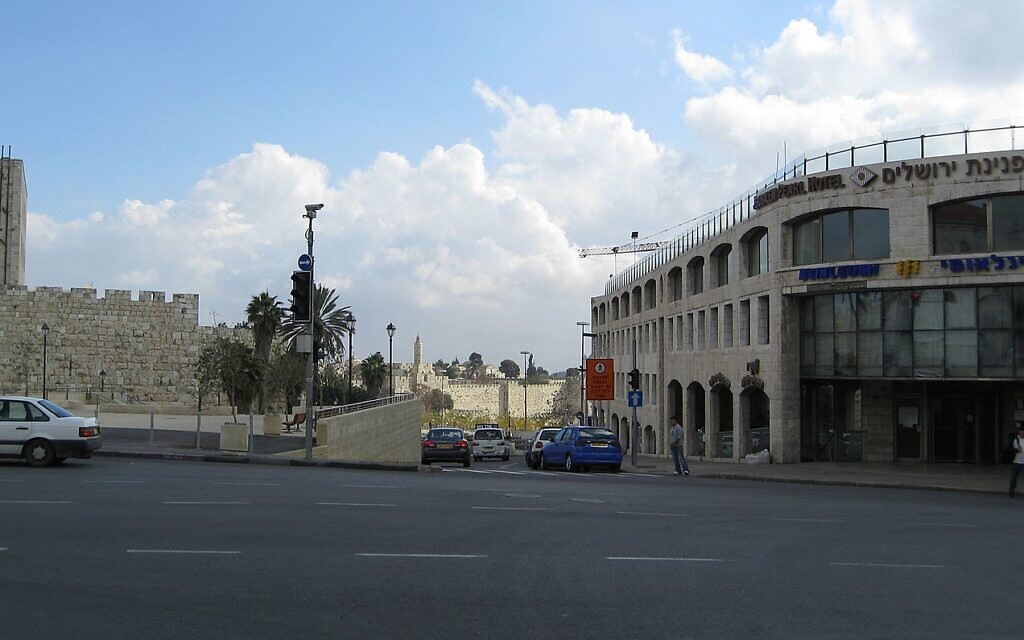 Plans for a new hotel in Jerusalem are underway after the municipality won a major court victory earlier this year to demolish a major eyesore in the city center and rebuild from scratch.

The city has been working for years to obtain the website known as the “Dan Pearl Hotel” or the “Pearl of Jerusalem”, opposite the Jaffa Gate of the Old City at the end of the Mamilla compound, cleared for reconstruction.

Tenders have yet to go out for the new hotel but, after two decades of decay and litigation, the existing building’s ill-fated life will soon be coming to an end.

For over 100 years, the building has been continuously occupied by hotel operations. The first in a series was built as the Howard Hotel in 1891. It was followed by the Fast Hotel in 1907 and St Andrew’s House in 1918.

The Jerusalem Municipality purchased the site from the Armenian Patriarchate in 1974 and promptly demolished it. Developer greed caused the site to sit empty for several years. But finally the authorization was granted for four floors underground and three floors above ground, to deliver 110 hotel rooms and an indoor swimming pool. Construction began in the early 1990s and the Dan Hotel Group took over, launching operations as Dan Pearl in 1996.

Sign up for free at ToI
Israel Real Estate Newsletter

Discount Bank, however, effectively closed the hotel in 2000, issuing a liquidation order totaling NIS 170 million ($48 million) to the holding company that owned the site. No bids were accepted for the hotel and the Dan Group left when its management contract was terminated in 2003. A company owned by Poju Zabludovicz, a billionaire British businessman of Finnish descent, bought the building and attempted to continue to run it as a hotel. , but sold it to a French property company in 2007, and the hotel itself closed in 2008.

After years of working with French developers to revive the hotel, the Jerusalem municipality finally lost patience and sued them.

In the years that followed, the developers demolished the interior floors and ceilings to support their claim that they should be exempt from property tax because the hotel was uninhabitable. Jerusalem has drawn up plans to demolish and rebuild a new hotel on the site that would be similar to the previous hotel in terms of proportions. The developers refused to accept this offer and requested additional floors to raise the height of the building. The city refused to accept the proposal on the grounds that it did not fit into the surrounding townscape, a particular sensibility given its proximity to the Old Town.

In court, the municipality described the current structure as “a danger to the environment” and clarified that despite the call for the structure’s demolition, “he was committed to encouraging and promoting building plans throughout the city, including plans for hotel and resort complexes”.

Initial reconstruction plans were approved in 2019, according to a local report. These include approximately 150 hotel rooms, 20 residential units and a shopping center on the ground floor.

Demolition equipment should arrive in the coming months.

Israeli elections are approaching Again — this time November 1st. How did the electoral system become so dysfunctional, and what could resolve the repeated deadlocks?

The Times of Israel is proud to present a new limited series podcast, Crippled nation: How Israel’s dysfunctional electoral system can still be fixed. Our political analysts and journalists reach out your questions on the burning issues facing the Israeli electorate today.

Only available to members of the ToI community.

Already a member? Log in to stop seeing this

You are a dedicated reader


We’re really glad you read X Articles from The Times of Israel over the past month.

That’s why we started The Times of Israel ten years ago – to provide discerning readers like you with must-read coverage of Israel and the Jewish world.

So now we have a request. Unlike other media, we don’t have a paywall in place. But since the journalism we do is expensive, we invite readers to whom The Times of Israel has become important to support our work by joining The Times of Israel community.

For just $6 a month, you can help support our quality journalism while benefiting from The Times of Israel WITHOUT ADVERTISINGas well as access Exclusive Content only available to members of the Times of Israel community.

Thanks,
David Horovitz, founding editor of The Times of Israel

Already a member? Log in to stop seeing this

Celebrating half a century of women’s varsity athletics

The application for student loan forgiveness is online. How to register