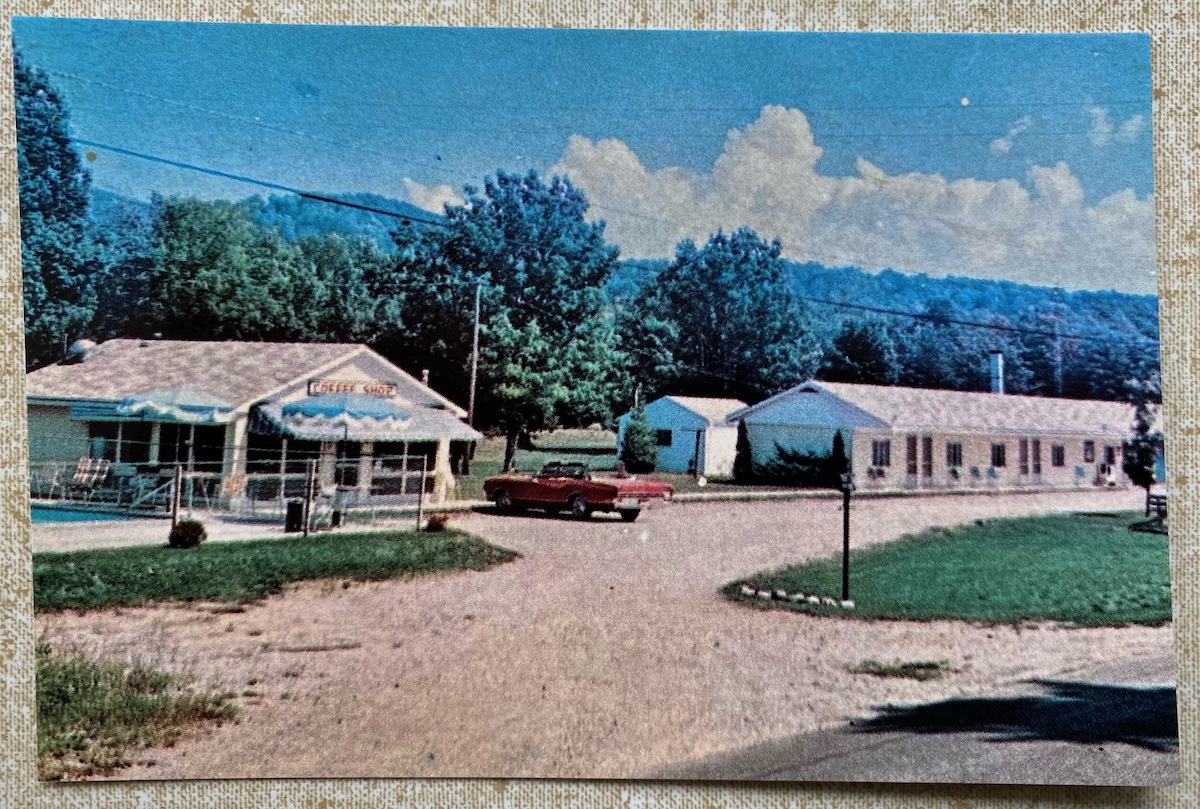 The foothills of Glen Lake are reminiscent of simpler days

In the 1950s, when Americans were invited to “see America in their Chevrolets,” the typical roadside motel was a series of adjoining rooms, sometimes with an on-site cafe and pool. Over time, the interstate highway system turned travelers away, and chains like Holiday Inn and Howard Johnson turned ubiquitous roadside lodging into an anachronism.

But the foothills of Glen Lake, circa 1957, are booming. (Pictured above in the “old” days.)

Eccentric… but with roots
Almost everything about the Foothills is a little quirky – having fun, Schitt’s Creek path – from the origin story to the unlikely stewardship of the current owners, a trio bound by family, friendship and profession.

The first owner of the Foothills was Roland Foote, who built a do-it-yourself cabin kit from Montgomery Ward’s catalog on the shores of Lake Glen. The rental income from this cabin made him see the potential for something even bigger. He bought more properties, ordered more cabin kits, and in 1957 put them together to form an 8-unit roadside motel.

There have been other owners over the years, one of whom has installed an in-ground pool, a powerful attraction in the roadside motel business. Eventually the pool fell victim to expensive liability insurance and was filled. Speaking of casualties, local rumors said the pool site was the final resting place of an upstate mobster. It’s a good story, and some like to think it haunts coffee. (Crime junkies take note: The dates do not match Jimmy Hoffa’s disappearance.)

In 2009, Shari Bernstein and Paul Staber from Toledo and Shirley Cheney from Indianapolis were in the area to visit Paul’s brother. Before leaving town, they ate at the Foothills Café. Later, Paul’s brother called them on the way and said, “Hey, that restaurant you just had breakfast at is for sale.

Fast forward a bit, and the “three unlikely souls,” as Bernstein puts it, have become owners. Cheney had dreamed of opening a bed and breakfast. Bernstein was a counselor and Staber was in charge of a drug and alcohol treatment center. “We met in prison,” Bernstein deadpans.

Retro… but without the irony
Today, there isn’t much more “vintage summer” than the Foothills. Yet the place is not a throwback to another era, nor a nostalgic trip. On the contrary, it is what it is: a nod to the way things used to be, with the recognition that things can be simple and still be great.

It’s a bit offbeat, that’s for sure. (Body parts, hopes, and dreams are included on the do-not-flush list posted in every bathroom.) But people who understand the vibe keep coming back for the comfy beds, sturdy water pressure , fluffy towels and a satisfying breakfast, all tucked away under the trees on a country lane. Those in need of more modern, shinier comfort go elsewhere.

“Most people say, ‘It’s clean and comfortable and cute. Don’t mess with it,” Bernstein says. And, location is a big draw. “We have many repeat customers who like to be away from the hubbub of Glen Arbor but still appreciate the convenience of being nearby.”

The motel is a short drive from downtown Glen Arbor, the beaches of Glen Lake and Sleeping Bear Dunes State Park. Guests can also go by bike or on foot, but be prepared for the hills. (Someone from the Foothills will be sure to pick you up, if you need a lift, and bring you back. Now there’s service!)

Breakfast all day… but with an altruistic side
Due to current staffing issues, the Foothills Café serves breakfast only, 8am-2pm, Thursday-Monday. However, it is bubbling with guests and regulars, local and seasonal. In high season, the small address prepares 90 to 150 meals a day.

The cafe’s simple style goes well with the motel’s retro vibe. The original Formica dinette tables are still in use, but the matching pink dinette chairs – it was the fabulous 50s, after all – were falling apart and, unfortunately, could not be saved.

Another favorite is Eggs Benedict, and the cafe has beaten some heady competition: Londoners summering in Glen Lake have sampled the dish in fine European restaurants, but prefer the Foothills version, hands down. “Europeans seem to like [The Foothills]Says Bernstein. To wit: An Italian family staying at the motel needed to cook pasta for their little one, so Bernstein took the mother into the cafe’s kitchen and put the pasta water on.

A helping hand comes in many forms, and one of the first things the owners did in 2009 was set up a coffee prepayment arrangement. Customers can purchase someone else’s meal or purchase gift certificates, many of which end up at area food banks and churches.

Additionally, Bernstein continues to work part-time on the board and she is particularly sensitive to the dangers of an overdose in Leelanau County. The Foothills has partnered with Harm Reduction Michigan and, through a grant, offers free nasal doses of naloxone, which is used to stop an overdose.

Outside the cafe, the Harm Reduction Box looks like a white metal newspaper box and its contents are free. “If it can save [a] life and reach more people is for anyone who shows up and wants to,” Bernstein says. Pay it forward, indeed.

Old(er)…but new again
Mid-century motels are experiencing a retro-chic renaissance, so the Foothills is all the rage without even trying. Still, the trio looks to the future. A sauna is planned, and at some point they hope to polish the 50s look with modernity into a “boutique experience that suits all customers”.

In the summer, Sunday concerts are held on the aft deck. Bring wine, lawn chairs and be entertained: Larz Cabot, John Kumjian, Andre Villoch and Blind Dog Hank, among others, have been on stage. Suggested donations help defray costs. According to Bernstein, “It allows us to circulate the music and the energy. It’s always a good time.

In the meantime, the owners are enjoying the trip. “We love being up north,” Bernstein says. “This place is magical.”