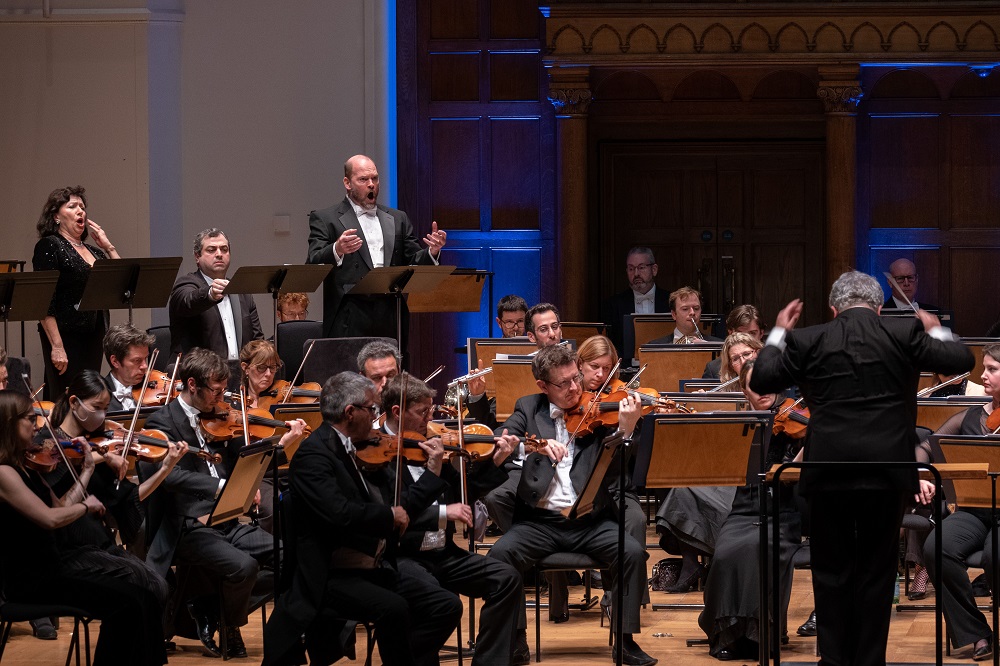 Give me Rachmaninoff’s memory any day, but at least Leoncavallo’s hokum enjoyed top singers and conductors at Cadogan Hall last night.

The quality was assured before the first note of the evening. Carlo Rizzi, here at the head of the Royal Philharmonic Orchestra, stands alongside Antonio Pappano as quite simply the most idiomatic performer of Italian opera. And what he offered before Zingari was not an opportunistic little beer. He had spent the confinement doing orchestral suites, more properly symphonic poems, according to Puccini Tosca and Madame Papillon. Too often Puccini, one of the great orchestrators, walks past people at the opera, but you can’t ignore the skill and kaleidoscopic variety here. Rizzi’s selection, not chronological, indeed gave us four joint symphonic movements: an overture focusing on the horror of the sadistic power of Police Chief Scarpia, a slow movement skipping a bit of the duet of act three before. to show the instrumental beauties of “Vissi d ‘arte”, culminating in the march of the shooting squad to cut straight to a scherzo composed of the lively music of the sacristan and the church choir stopped dead in their tracks. rustling tracks by the arrival of Scarpia. It’s always a bit disappointing for me that the opera ends with an orchestral belt of “E lucevan le stelle” from the hero Cavaradossi, but this was justified here by the clarinet solo introducing it into the prelude of the act three as part of the finale. Throughout it all, one could marvel at Rizzi’s agility, the dynamic range he got from RPO, the rationale of Puccini the symphonist.

For Leoncavallo, Italian ease had to be taken for granted. The brushstrokes are wide because this frightful entertainment composed to follow dancing animals and acrobats at the London hippodrome is based on a whole arsenal of cliché exoticism: Polish rhythms and mazurka (for a gypsy choir!), Hungarian vssárdás mode, the supernatural tone scale, the increased seconds of the eastern scale for hoochy-koochiness, even a habanera to follow that of Carmen. Which is appropriate, because Prosper Merimee, on which Bizet and his collaborators based their opera, translated the original Pushkin into French.

Not that much is left of the original tale, in which urban malcontent Aleko finds freedom among rovers – and love with Zemfira, but not for long; his adventures, like those of Carmen, last only six months. To give us a not quite conventional soprano-tenor-baritone triangle, the plot of Leoncavallo dumps the young gypsy with whom Zemfira belatedly engages in favor of Tamar, the rough diamond that the heroine of Leoncavallo (called Fleana) first rejects and then resumes when she is tired of the stranger, Prince Radu. Leoncavallo’s main virtue in giving us two scenes in an hour is the compactness, the sliding from one short set to another, and the contrasts are about enough to hold the interest.

This is mostly opera by numbers, with a slightly higher level of memorable melody in the climactic duet for Fleana and Tamar. But this is all going in the right direction, and for that four top singers are needed. It’s always a pleasure to listen to the artistry of this great posed soprano Krasimira Stoyanova (photo above). And the safety was there in Lukasz Goliński’s Old Man (the smallest of the four solo roles), tenor Arsen Soghomonyan and authentic Italian baritone Stephen Gaertner, replacing an indisposed Carlos. lvarez. That this American would do the gloomy and mighty job perfectly was no doubt since he was remarkable in Opera Rara’s previous Leoncavallo venture, Zaza, a more interesting work.

Opera Rara’s professional choir could have settled for a little more testosterone from the men, and at times the soloists made it sound like a recording studio adventure (it will be releasing of course on the Opera Rara label). But it was never less than enjoyable, even though the final conflagration – no stab wounds for that outcast, just arson – drew the laughs. Bravissimi, Rizzi and company. Just one thing – Cadogan Hall really needs to toughen its mask law; not doing it now looks and feels bad.

🌱 Sachem Daily: Shooting in a shopping center + Mother of 4 missing persons + Death at the hotel