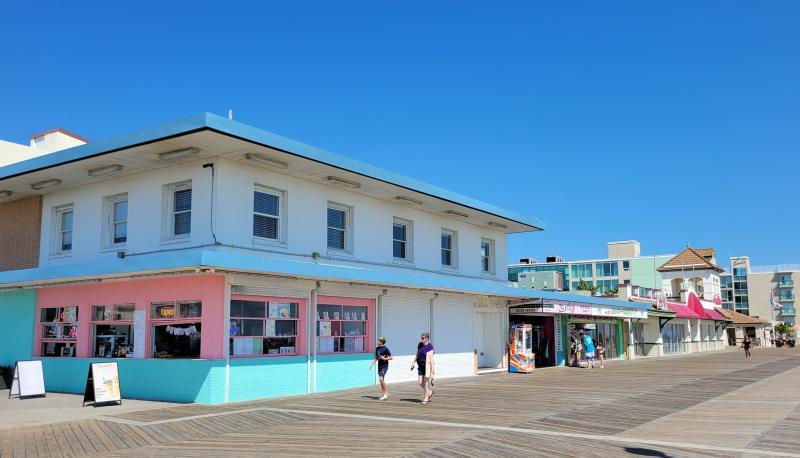 For decades, Grotto Pizza in Rehoboth Beach has been in the beach pizza business. Now it looks like they are getting into the beach hospitality business.

Under the name of One Rehoboth, a new hotel is proposed for the Rehoboth Beach Boardwalk. According to city officials, the hotel would stretch from Rehoboth Avenue to Baltimore Avenue.

The proposed hotel is not a total surprise. Grotto Pizza already owned the land on the north side of the block. The company announced in February 2021 that it had purchased the remainder of the beachfront portion of the block. At the time, company representatives said that other than moving the northern location of the Grotto Pizza Drive to where Dolle was located, no plans had been made for the stretch of beachfront property.

The beachfront block between Rehoboth and Baltimore Avenues comprises two lots, and although Grotto Pizza has announced its ownership, there is one difference between the two lots – the Baltimore Avenue side of the block, as GP North Boardwalk LLC, has a mailing address for Grotto Pizza’s corporate headquarters on Route 1, while the Rehoboth Avenue portion of the block, as One Rehoboth LLC, has a mailing address of 150 Onix Drive in Kennett Square, Pennsylvania. This is the same address for property developer Onix Group, which has a number of projects in Sussex County, including the Rehoboth Medical Arts Center on Route 24 outside Rehoboth, and the Veterans Administration Outpatient Center , Sun Behavioral Health and College Park in Georgetown. They also operate a number of developments in Dover.

Representatives for Grotto Pizza could not be reached for comment. However, in an Aug. 11 email, Onix Group Vice President Jonathan Silver said that Grotto has not yet submitted anything to the city, so it would be premature to provide specific details at this time. The development team plans to make an official submission to the city very soon, he said.

“Grotto looks forward to bringing this project to the city, and we hope it will be received positively as a necessary redevelopment of this end of the block,” Silver said.

1 Rehoboth Ave. is probably the most iconic corner of Rehoboth Beach, Silver said. The Grotto development team is looking to update and modernize this whole corner with a pedestrian-friendly first-floor retail space anchored with a new Grotto Pizza restaurant at the corner of Rehoboth Avenue and the boardwalk, a- he declared.

Grotto is looking to build a boutique hotel with underground parking, Silver said. The final hotel design will complement other hotels in the city, as well as at the north end of the Baltimore Promenade and Avenue.

“It will definitely be an improvement over what is currently on most of this block facing the promenade,” Silver said.

Project discussed during the curators’ workshop

Although details about the new hotel are limited, it was mentioned several times by city officials during a commissioner’s workshop on Aug. 8.

Acting City Manager Evan Miller said he and city building inspector Matt Janis recently met with people representing the hotel. He said the Beach Patrol building schedule has been questioned and working with them to coordinate the two projects is something the city is open to.

Mayor Stan Mills said the timing of the two projects will be very important because after the Grotto Pizza buildings are destroyed, the new one will have to fit in with the city’s Beach Patrol project. The timing could be right, he said.

Janis said the builder hasn’t offered a timeline, but plans could be submitted in September or October.

City attorney Glenn Mandalas said the initial submission would likely take the form of a waiver application before the city’s board of adjustment. They are still weighing the option of going to the planning commission or the adjustment board first, he said.

Later at the August 8 meeting, the proposed hotel came up during a discussion related to a potential city code change that would require all oceanfront commercial buildings to go through the review process. of the city site plan. Commissioner Edward Chrzanowski asked if this was being discussed in relation to the proposed hotel.

Mandalas said no. Based on what the city has seen, it should already go through a site plan review due to its size, he said.

The Belhaven Hotel project caught up in a lawsuit

If the One Rehoboth hotel project comes to fruition, the Baltimore Avenue boardwalk area south of Wilmington Avenue could look very different over the next decade. There is already a proposed new hotel for the south side of Rehoboth Avenue – the Belhaven Hotel. This hotel was first introduced in April 2019. The project has an address of 2 Rehoboth Ave., but the property faces the boardwalk to the southern boundary of Grotto Pizza’s property, encompasses the entire space commercial from Rehoboth Avenue west to the property line with Go Fish, and extends south to Wilmington Avenue. The Belhaven project does not include a square-shaped property that includes Gus & Gus, the boardwalk-facing five-penny store, and Zogg’s Raw Bar & Grill on Wilmington Avenue.

The Belhaven project is currently in litigation. In November, the city’s Board of Adjustment approved a waiver request allowing the floor-to-area ratio of the project to be increased from 2 to 3. Citizen Francis Markert appealed the waiver approval to the Court Upper Delaware in February. Markert is expected to become city commissioner in September because he was one of only two candidates to file for the city’s two open commissioner seats this year.

The city asked for the dismissal. Briefs have been filed, but no hearing has been scheduled at this stage.

High Desert Food Trail, a self-guided culinary experience, is in full swing for the summer season