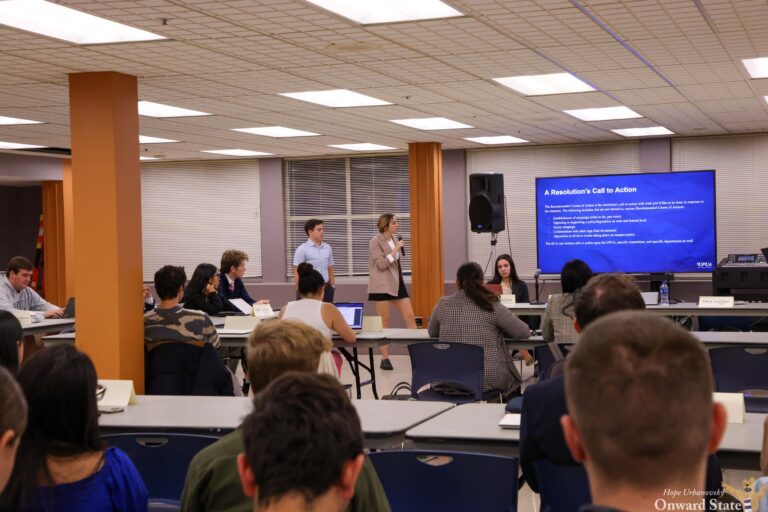 The 17th Assembly of the University Park Undergraduate Student Association reconvened on Wednesday evening for another regular meeting. During the meeting, funding the PSU vote debate, “Who gets the Latino vote?” event, and the publicity of the Penn State lawyer was rewarded.

The assembly meeting began with a training on the Intercultural Development Inventory (IDI) in partnership with the Office of Global Engagement.

Following training and reports from UPUA President Sydney Gibbard and Vice President Carter Gangl, the 17th Assembly held a quick caucus meeting and got into some new business.

Three bills and two UPUA policy changes were introduced this week. The first was Bill #13-17: Funding to Support the PSU Votes Debate.

Bill 13-17 proposes $520 to cover rental costs for Heritage Hall, which held the annual PSU vote debate between Democrats, Republicans and college independents in a bid to educate the student population on voting issues ahead of the upcoming midterm elections in November. . The debate took place on Monday 17 October.

Next up was Bill 14-17: Funding to Support the “Who Gets the Latino Vote?” Event. The event partnered with the Penn State Latino Caucus to focus on issues facing Latino students and their relationship to voting in the upcoming midterm elections, encouraging civic engagement among these students.

The bill proposes $40 in funding for the coffee that was served at the event, which took place earlier that evening.

Funded prizes include Amazon Gift Cards, Penn State Student Bookstore Gift Cards and a Penn State Men’s Basketball Season Pass. Additionally, part of the funding is dedicated to printing marketing materials to display in the HUB, at a total cost of $209.

Mackenna is a junior food science student from Manitou Springs, Colorado and is one of Onward State’s associate editors. She loves food, is addicted to coffee, and can give you random facts or bad jokes that you didn’t ask for. Ask her to bake gluten-free treats so she has an excuse to try new cupcake flavors. Mackenna can be reached via Twitter @mackennayount (especially if you want to show off your best dad jokes) or you can email him at [email protected]

Hotel Equities announces the opening of TownePlace Suites by