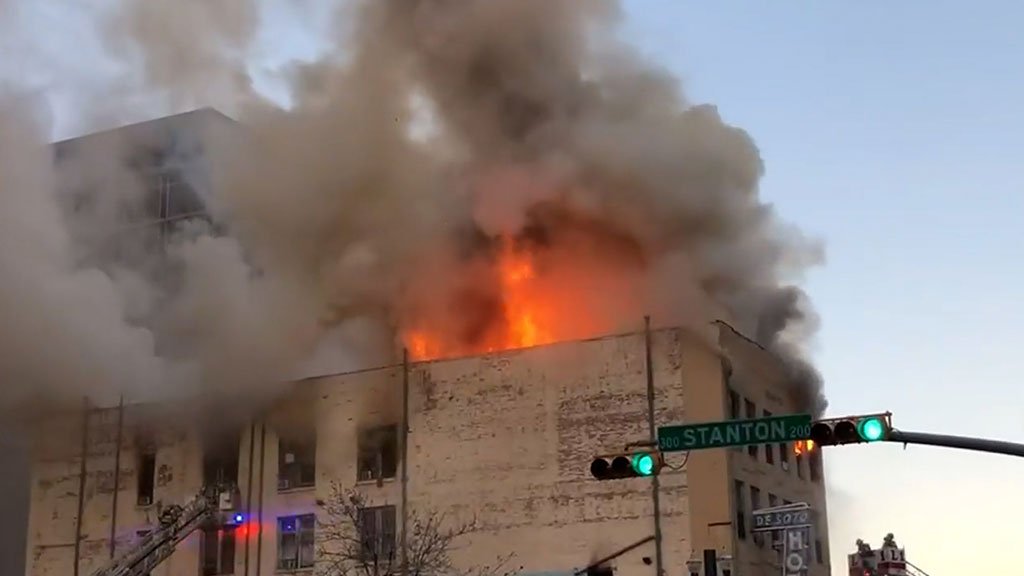 WATCH: Incident commander talks about a large fire at the DeSoto Hotel in downtown El Paso: Flames and smoke have receded

UPDATE #9 7:16 PM: Incident Commander reports no injuries, 24 units responded, up to 60-70 firefighters responded. The roof collapsed. Entry into the building will only be made once the fire has been extinguished. It is a 4 storey building. Crashing sounds during a fire came from exploding windows. “We got the fire under control,” at the DeSoto building.

It will be determined later if the building is a total loss. No entry tonight, maybe during the morning hours. No one was suspected of being in the building.

UPDATE #7: A restaurant owner says he saw things quickly spiral out of control in about 5 minutes from when he heard about the fire until firefighters arrived.

UPDATE #6: The flames appear to be less intense than moments ago.

UPDATE #5: Objects are seen falling from the building. Saul Saenz reports that firefighters are asking people to stay away.

UPDATE #4: Parts of the DeSoto Hotel roof have collapsed.

UPDATE #2: Guests at the nearby Indigo Hotel are being evacuated.

UPDATE #1: El Paso Fire reports that the fire is at the DeSoto Hotel.

There are no reported injuries.

EL PASO, Texas – ABC-7 received a report of a large fire in downtown El Paso. ABC-7 is working on finding out more.

Initial reports indicate the fire is located in a building on Mills.

The property is in the midst of a $1.2 million restoration project. In mid-December, the owners, Mills LLC, entered into an economic development agreement with the city of El Paso, allowing it to receive over $58,000 in incentives.

The plan called for the renovation of the hotel’s 34 units, described as “dilapidated”, would consist of converting the upper floors into a standard hotel and rehabilitating the storefront on the first floor, according to the presentation made to the city council.

The owner was also trying to secure additional funds for the facade and signage from a program administered by the Downtown Management District.

This is breaking news. Download the KVIA News app to receive alerts on developments.

Traveling nurses say they are not paid by Jogan Health Solutions