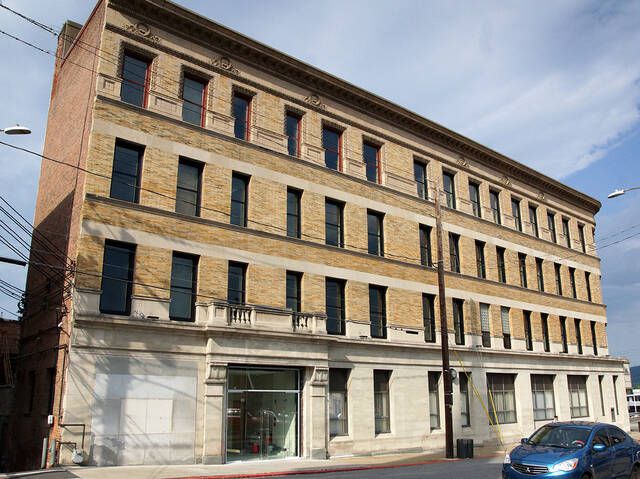 Work on The Landmark continues

PITTSTON — The revival of The Landmark building has been progressing since local businessman Rob Bresnahan purchased the building from Fidelity Bank in 2021. Office renovations on the top three floors of the four-story building are completed.

“Floors two, three and four are complete,” Bresnahan said. “They are ready to move in and each floor is between 3,000 square feet and 3,200 square feet. We would like to rent an entire floor as soon as possible.”

Some of Bresnahan’s other business affiliations, such as certain departments of Kuharchik Construction and the Pittston Town Center Development Team, will also occupy the third floor.

“The fourth floor is a large floor with about 3,200 square feet of space,” Bresnahan added. “This floor will be an all-inclusive floor paid in a lump sum for the entire floor. We will pay for all utilities and internet along with all new fiber optic cabling enabling gigabyte speed built into the building. »

All office walls have been painted, including common areas with new flooring installed throughout.

Glazed doors from the Broad Street entrance have been installed and lead to a lobby with a staircase to the upper floors, access to the first floor offices and a lift which is being upgraded.

New flooring has also been installed in the hall and the entrance door will be accessible in a controlled manner for security measures.

Bresnahan said the Broad Street entrance should be ready by August 1.

Fidelity Bank still occupies the entire ground floor, including the annex section. They have the option of renewing their lease for a second year, if they choose to stay.

“They (Fidelity) have been great,” Bresnahan said. “Obviously they were the previous owners of this building and they are bringing 25 people downtown and with all the other upgrades going on with downtown such as the dining halls, they love it here. I hope they maintain a presence in downtown Pittston; It’s imperative.

Although Bresnahan initially thought The Landmark would be a hybrid building with offices, a hotel, a restaurant or even the possibility of a hotel and residential living space, for now the plan going forward would be an office space.

“The concept was for us to do 27 (hotel) rooms here,” Bresnahan said. “We don’t want to do a preventative move without knowing where we’re going, but there’s definitely a need for accommodations, especially in Pittston.”

Bresnahan thinks as Pittston’s revitalization unfolds — with new businesses coming in and an entertainment center — hotel rooms could be needed within five years.

“There really isn’t a hotel to stay in the Pittston area, you’d have to go to Wilkes-Barre or Scranton,” Bresnahan said. “People should stay in Montage, Arena area or Woodlands. If you have 70,000 people coming to town for the tomato festival, where else would people from out of town go? It would be a great location.

Bresnahan said he would like to do themed rooms for the hotel, like a tomato-themed room or a coal mine or clothing theme, for example.

The proposed cafe across the street from the Landmark Building parking lot is beginning to take shape. Bresnahan said all the components to convert the bank’s former drive-thru are in place.

“I’m always looking to explore the possibility of partnering with someone to run the cafe,” Bresnahan said. “We specify it and all anyone would have to do is move their equipment, so if anyone is interested, get in touch.”

Bresnahan also noted that an ATM will also be available at the cafe site.

Bresnahan said he has a lot to do when it comes to researching the building’s history, but he likes the structure’s sturdiness and its potential for entertainment, dining and residential use.

“The building is 11,400 square feet and we plan to add a 1,000 square foot roof terrace on the southeast side of the building overlooking the Tomato Festival grounds and the fire department. “Bresnahan said. “There will be 12 residential units including some loft-style apartments.”

The Burns building was just acquired a month ago and there is plenty of access, according to Bresnahan.

“We are at the infant stage and we know, conceptually, what we need to do,” Bresnahan added. “We are talking about the possibility of a commercial space on the first floor for a brasserie or some sort of entertainment venue and so at this point we have completed the border of the puzzle and we need to fill in the center.

Technology in the city center

If you take a look at the top corner of The Landmark’s roof, you’ll see a recessed high-resolution video camera overlooking South Main Street installed by Novation Networks LLC.

The camera was installed a few weeks ago, giving the city a very different look, especially the night view.

“The camera can be rotated 360 degrees and we can point it in any direction,” Bresnahan said. “We have a great view of the firefighters memorial bridge so if it ever gets replaced we will be able to follow the progress from the webcam.”

To get a view of the city from The Landmark building, set your browser to: https://tinyurl.com/mrffnhtr.

On the website, you will also be able to see long time-lapse videos from the previous 15 days.

The Beatles Shared Hotel Rooms Even After Making It Big