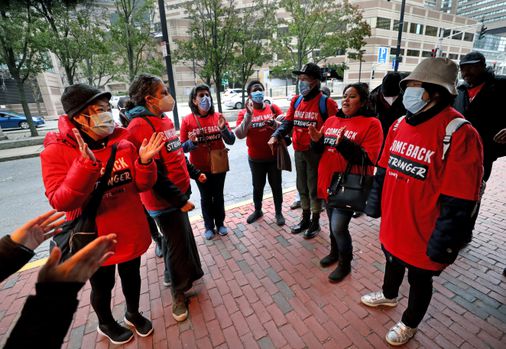 The hotel has been on Huntington Avenue and Exeter Street since 1891, making it the second oldest hotel in Boston in continuous operation. But it’s been closed for months, for pandemic restrictions and now renovations. Its main phone line was disconnected on Thursday.

Hawkins Way Capital, a Beverly Hills-based real estate company, purchased the hotel in 2019. At the time, company officials said in a press release that they planned to “update and reconfigure the hotel. rooms and dramatically improve the hotel’s common and commercial areas. . “

“The property is still under construction, we are working with the city to get this cleared,” Joshua Bird, general counsel for Hawkins Way Capital, said Thursday. “We are trying to open as soon as possible, as soon as we can handle.”

Bird said he doesn’t know when employees can expect to hear about their work.

“We try to stay as open as possible, but we really don’t have more information,” he said.

The Copley protest was part of a day of action by hotel, casino and food service workers in the United States and Canada, organized by locals of the UNITE HERE union. Workers, some of whom had to work during the pandemic and others who saw their jobs disappear when the closures began, have called on their employers to restore lost jobs and amenities like room service, which were removed in some hotels despite an increase in activity during the summer and fall.